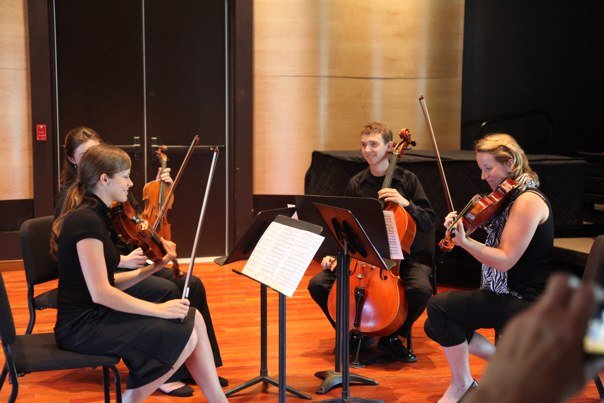 I’ve been playing viola for a fair few years now, to the point where I don’t really remember the instances of learning various orchestral playing techniques. They just are.  Music has been such an integral part of my life for so many years that an osmosis of musical leadership and techniques has seeped into my ‘regular,’ everyday life.

It struck me last weekend, during a gig/rehearsal marathon, that these lessons have directly informed the way I work, the way I live, and to a point the way I try to lead. When things are so intertwined, as life experiences tend to go, sometimes it takes a lightning bolt realisation of sorts to reveal where the source of said thing actually is.

For example. During college, studying music wasn’t a matter of showing up to class, writing a few papers and calling it a day (obviously oversimplifying here, but my experience as a journalism major was exactly that, a stark contrast to the music school side of things).

Being a music major was a vocation, even as an undergrad. My friends and college boyfriends can attest to the late-night rehearsals, twelve-plus hour days and routinely expected weekend commitments. That was the way it was. You wanted to study to become a musician, then you were going to be married to your craft and bite off as much that tip of the iceberg as you could chew.

I got used to the pace. I loved it, actually. Even now, only my most horrible work weeks look similar to my college undergrad schedule.  My average busy week is tame compared to the roster of my student days. (The difference now is that the stakes are higher and my schedule is much more constant, but that’s another subject.)

I think this is an interesting theme, and one that I’d like to explore further should the subject not die while it’s still in my head, as so many of my other blog post topics do.

I think the first thing that music taught me was that you do what it takes. You work hard, and if that means leaving the practice room at 1am, that’s what it takes. If it means 10pm quartet rehearsals and tearful lessons because you just can’t get that passage, then so be it. More often than not, the hard passages are black and white. If it’s not right-to the millisecond- it’s very, very wrong.

I should probably note that for some, “doing what it takes” means going to unhealthy extremes, which is not what I’m advocating. I’m thinking more along the lines of giving up certain comforts for a larger goal. Those  extraneous comforts don’t include a semi-healthy lifestyle, close relationships, or sanity.

The more I progress in my non-music career, the more I’m realising that doing what it takes is not a ubiquitous thread. I’m lucky enough to be part of a team where it is, but I work with so many others where it isn’t.

These lessons aren’t universal, I’m realising with increasing frequency just how rare it is to find this ethos. I’m also realising just how much this has informed my approach to work and life, even outside of music. Because this is the thing: once you’ve learned something, you can’t unlearn it. I learned early that you do what it takes, and once you adopt that approach you don’t exactly leave it behind. Sure, there are fewer late nights now and I don’t practice nearly as much as I should, but the kernel of that truth remains.

Music as a vocation is a wonderful ride, but it’s not for the faint of heart. As a full-time profession, it’s not for me. That said, the lessons learned are pervasive, and doing what it takes is just the beginning.