At the beginning of the year, I made a belated vow to hunker down and learn how to drive a manual already. The process itself went remarkably well. Through the instruction of Peter and pretty much every one else (because really, who doesn’t consider themselves an expert on driving?) I tentatively made my way onto the road- the left-hand side, of course.

There have been no real incidents to report, aside from a run-in with a concrete post in our garage that I’d reallyrathernotdiscuss. I can shift gears without bunny-hopping and even manage the dreaded hill starts without the use of the handbrake.

That New Year’s resolution can consider itself officially checked off the list.

My evolution into the world of transportation has been nebulous. For the first few years of my licensed adolescence I drove a hand-me-down vehicle that had belonged to my grandmother: a gold Crown Victoria.

I was a a teenage girl wearing pink Chuck Taylors but I looked like an undercover cop. So that was fun. Pro: I got really good at parking. The car was a behemoth- my friends called it The Boat.

As I entered college I was happy to relinquish the Crown Vic back to my Dad, who I believe still drives it, ridin’ dirty for all the world to see. Thus began my carless years which, for better or worse, consisted of bumming rides home off other students. This resulted in a few interesting situations, one of which involved the driver and his copilot getting stoned out of a water bong while driving down the treacherous highway 321. It was funnier than it sounds, I think.

(I should probably clarify that I was not the copilot in the aforementioned situation.)

When I moved to New Zealand, I fell in love with Peter partly because of the car he drove. He knows this already.

A rugged Toyota HiLux (4Runner to the Americans), it was a great car for camping and adventuring in. On the way back from a skydiving weekend it overheated and was subsequently sold.

Enter: bikes. My love affair with cycling as a means of transportation began.

Post New-Zealand and back in the US, we had the Toyota Sienna (stunningly reliable, even in the ice. Great for loading a drunk late-night crew into for a run to Cookout.)

The Sienna was followed by the Mazda 3, a car that I wanted simply because it had a sunroof and Bose speakers but one that proved to be a fabulous little vehicle.

Now that we’re here, the Subaru has proved to be a somewhat misguided purchase, but we love it nonetheless. 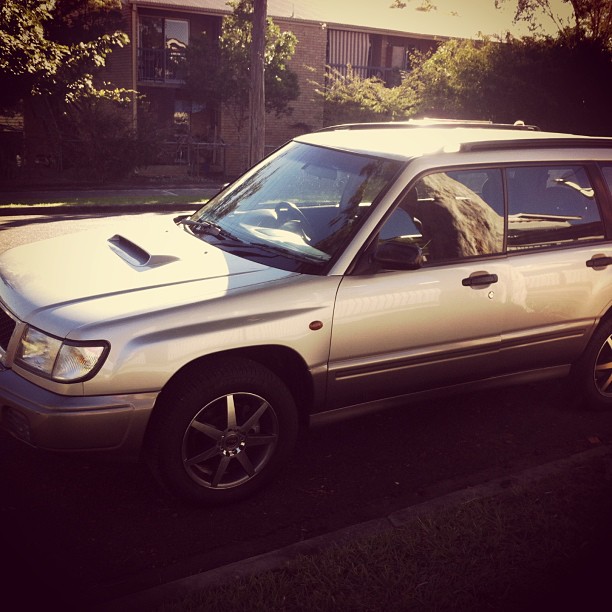 More cars will undoubtedly come and go, but a part of me misses the bike-dependent existence in New Zealand through the rain and absolutely brutal wind. We’ll get older and cushier, and probably lazier, but I’ll still remember trying to balance shopping bags on the handle bars and riding tandem to pick up a pizza.

As glad as I am to be able to finally drive my own car, life was sure a lot simpler when transportation consisted of pushing one foot in front of the other and just getting up the next hill.